A platform for a new generation of world-class operatic performance.

Nevill Holt Opera is proud to announce the opening of its opera theatre at the Nevill Holt estate in Leicestershire on 14 June 2018. The new theatre opening marks the season’s opening night with Mozart’s Le Nozze di Figaro.

An architectural masterpiece, the height of the theatre sits inside the courtyard and flush with the stable-block, meaning that it’s invisible from the exterior but a 400-seat theatre on the inside. The design is set at the scale of a stable courtyard, so intimacy is a given because of its size. The building references the early courtyard theatres and the walls and character of the building become part of the characterisation of the final theatre space.

Chris Watson, Director, Witherford Watson Mann comments: “The new theatre is an historic building reimagined. The process was like making an instrument for operatic performance. The architecture had to synthesise with the surroundings to make the instrument work perfectly.”

David Ross, Chairman, David Ross Foundation, comments: “Nevill Holt Opera has a clear mission to enrich lives, and empower young people, through the power of music and the arts. I’m delighted that the design team we have created a theatre so sensitively to its surroundings – it is invisible from the outside but a masterpiece on the inside. We are looking forward to welcoming people to perform and experience opera here in the new theatre for the inaugural season and many generations to come.” 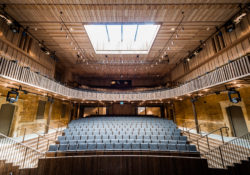