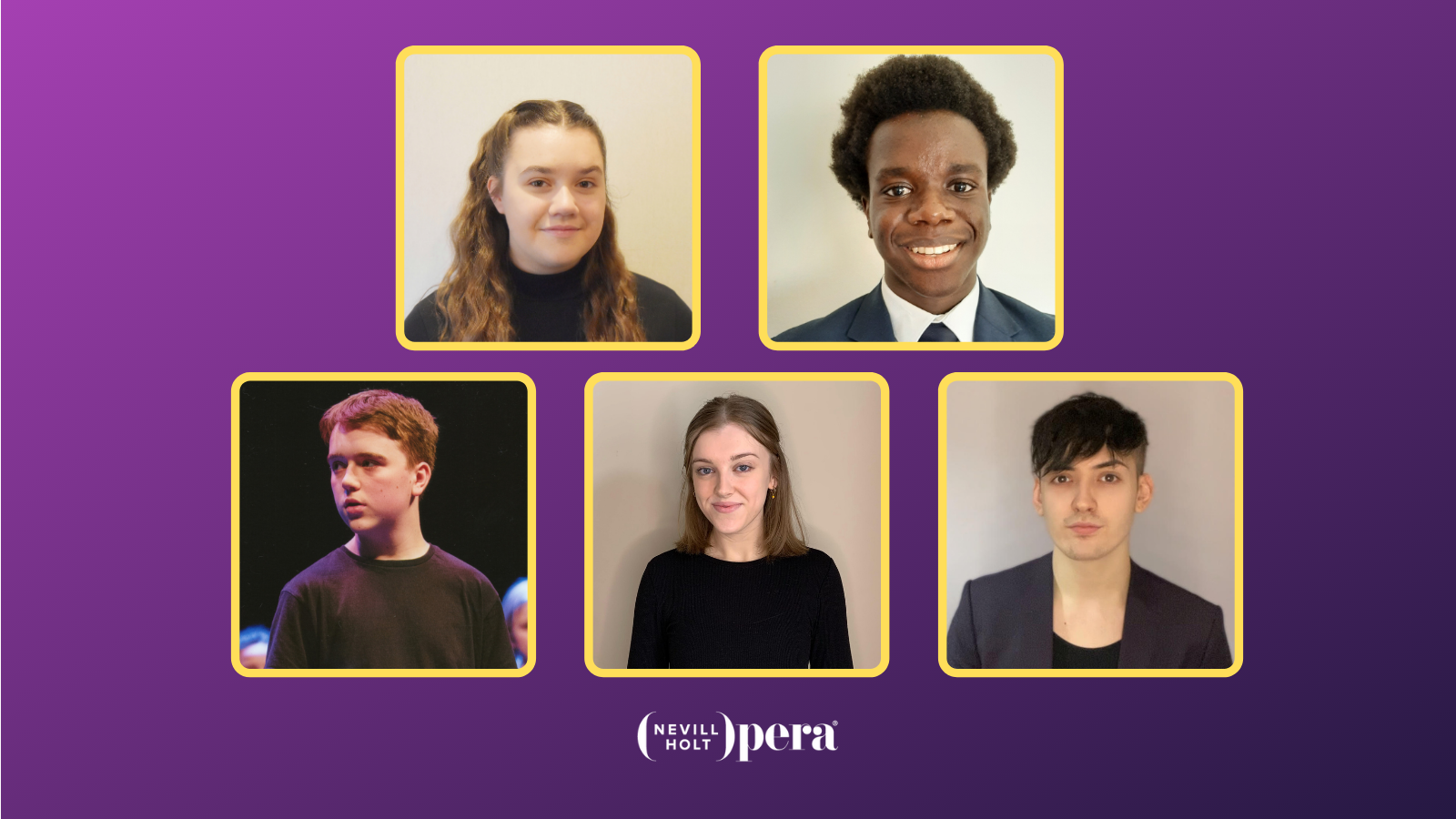 From 2021 NHO will provide five places in the opera festival onstage chorus for sixth form and recent school leavers who have previously participated in NHO’s education and community programmes. In 2021, these five Foundation Artists will perform in La traviata and Don Giovanni, gathering real-world performing experience and expertise at this crucial early stage in their development.

NHO was established to put education and high-level musical experiences at the forefront of its work. The purpose of the scheme is to bridge the gap between school and higher education, with these students participating in fully-staged productions alongside our NHO Young Artists and NHO Principal Artists. Each year NHO runs programmes and creates opportunities on our stage for primary and secondary students, and our productions feature post-graduate music college young artists and principal performers. This scheme crucially bridges the gap between school leavers participating in our work and subsequently returning to our stage as a young artist.

Students who have taken part in our programmes and performed in NHO operas as children from 2013 will be the first recipients of these new positions.

Nicholas Chalmers, Artistic Director of Nevill Holt Opera, said: “Nevill Holt Opera has put its education programmes front and centre of all its work since the creation of the company in 2013. Primary and secondary students have benefited from workshops, performing opportunities and seeing our shows. Many of these students are looking to pursue a career in the performing arts and need the experience, support and opportunities which their local opera company could provide. The creation of the Foundation Artist scheme bridges the gap between completing school and attending further education. This scheme will show a pathway to the stage for all young people involved in our work. Now more than ever, we need to show young people that there are future opportunities in our industry.” 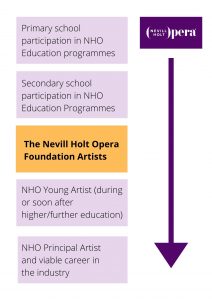 Why are we launching the Foundation Artist programme now?

Nevill Holt Opera has a mission to provide opportunities in the performing arts to young people across the Midlands. Through our work since 2013, we have seen that many school leavers simply do not see a career in performing as a viable and sustainable career. This problem has been exacerbated by the pandemic, as many sixth form and school leavers have been unable to perform and finish their schooling as they had anticipated. We cannot allow a lost generation of talented performers to be the legacy of the pandemic, and have set up this scheme to support five outstanding students from the East Midlands to gain the necessary experience to help launch and support their careers in the performing arts.

Our aim, through the programme, is that students who have seen our shows and taken part in our education programmes since primary school will be able identify a pathway to a performing career – supported by NHO every step of the way. NHO’s series of programmes now mean that talented students can identify a pathway to our NHO stage from primary to secondary school, to our Foundation Artists programme, to higher education or music college, to becoming a young artist and one day returning as a principal singer, director, designer, stage manager or technician.The East Midlands sees a very limited number of students studying music and performing arts beyond GCSE level, and NHO will continue to support local schools to revive music at sixth form level and demonstrate a way to enter the performing arts as a viable career option. We are committed to seeing students from a broader range of backgrounds succeeding in careers in the performing arts, and through our programmes we intend to focus particularly on young people who might not otherwise believe that pursuing a career in the arts is possible.

Elsie writes: “I count myself as very lucky to have attended the DRET school, Malcolm Arnold Academy, as it has given me an incredible basis on which to build my career in the arts. The opportunities have been extensive, challenging and hugely rewarding. With the Chapel Choir I have sung with the Britten Sinfonia and Gabrieli Consort, among others, and have sung in some world-renowned venues including St Martin-in-the-Fields and Ely Cathedral – this particular venture included singing on Gabrieli’s award-winning recording of An English Coronation which was a truly unique and wonderful experience. The vocal training I have had since I was 12 has also been built upon by undertaking regular workshops and performance opportunities with Nic Chalmers and Nevill Holt Opera – being a part of the Chorus in Carmen and La boheme first opened up the world of opera to me and I was fortunate to be asked to play a small role of the Page in their production of Rigoletto, directed by Oliver Mears. To play a small role in this production and to be among professionals, being treated as one of them, was a defining experience for me and cemented my belief that a career in the arts is the path for me. I am currently studying at Arts Educational School in London and hope to continue my vocal and dance training in musical theatre over the next 3 years.”

A student of the David Ross Education Trust (DRET), Beckwith Music Scholar and A level music student, Francesca is a member of Malcolm Arnold Academy (MAA) Chapel Choir and DRET All Stars Choir, both under the musical direction of Simon Toyne. Highlights have included performances with Gabrieli Consort and Gabrieli Roar and at venues such as St Martin in the Fields and St John’s Smith Square.

Francesca began her association with Nevill Holt Opera performing as part of the children’s chorus in the 2015 production of Carmen. In 2017 she was cast as Mrs Sem in Noyes Fludde and has participated in the NHO Songbook Project, singing at the 2018 NHO Spring Weekend. She has also performed in NHO’s Messiah both as treble soloist in 2018 and with MAA Chapel choir in 2019.

Francesca is a vocal student of Alison Roddy and has a passion for opera. She currently intends to read History at the University of Birmingham, but continue with her vocal study and performances, planning to study singing at conservatoire post-graduate with a view to pursuing a career in opera.

Aaron writes: “Throughout secondary and further education, working with the Nevill Holt Opera and experiences through DRET have always been a highlight of the years. Each event is an experience that I will always remember. My first opportunity to work with the Nevill Holt Opera company was in 2015, where I was in the children’s chorus for the production of Carmen. This was my first in-person exposure to professional classical singing. The quality achieved from working with the professional cast and orchestra has forever set the standard for me of what a performance should be. It was a very fruitful experience. Some of my most exciting experiences is taking part in the DRET music festivals and competitions. Being part of a trust of schools that have a high emphasis on music has always made me feel valued as a pupil within my school. Giving music a competitive edge encourages all students to try their hardest, and it never failed to bring the best out of me and many others. I am now planning on studying at the Royal Northern College of Music thanks to the constant encouragement and help I received through the Nevill Holt Opera company and DRET music.”

Michael writes: “Being at DRET schools through Primary and Secondary years has provided me with opportunities that I never thought possible. From seeing La boheme, my first opera, at NHO in Year 6 to performing as one of the main roles in Noye’s Fludde alongside Jonathan Lemalu, have all furthered my musical journey and challenged me to develop my voice in new directions, gaining a broader perspective as to what the future may hold. I am extremely grateful that I have had the opportunity to be a part of the Malcolm Arnold Academy Chapel Choir under the leadership of Mr Simon Toyne, in which I have gained the confidence to sing solos at some of the country’s most prestigious venues, including St Paul’s Church in Covent Garden and Dorchester Abbey. I also have a very supportive vocal coach (Rhonda Browne) and A Level music teachers (including Nic Chalmers) who have challenged me to work hard and learn to utilise my voice and musical knowledge to the fullest potential. I am currently focusing on my A Level studies as well as my upcoming graded trumpet and piano examinations. I am looking forward to the next steps, whatever they may be!”

Kyle writes: “Through my time studying at Malcolm Arnold Academy, I had the opportunity to perform very often through DRET events, such as the DRET youth choir, performing in things such as Gabrieli Roar, as well as performances working along side Britten Sinfonia. As well as this I was part of the MAA Chapel choir, where we performed such things as Handel’s Messiah, at Nevill Holt Opera alongside the Young Singers of NHO, and performing in the MAA big band at NHO as part of the DRET awards. This has helped lead me towards a career in the performing arts industry, currently studying at ArtsEd in London to one day have a BA in Musical Theatre to help carry me forward as a performer.” 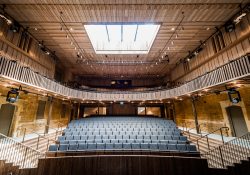