Education work is central to everything that we do at Nevill Holt Opera. From January to March this year, three NHO Young artists and our Artistic Director Nic Chalmers embarked on the Italian Songbook Project. 90 students from 9 DRET secondary schools took part in multiple session with our team – both group workshops and private lessons. One of the team, Philippa Boyle, has written more about the project and its impact on the students and on her.

I was delighted when I was invited to join the Nevill Holt Education Songbook Tour, especially when I discovered that it would involve exploring the Italian “Arie Antiche”: an anthology of baroque arias arranged for voice and piano, compiled in the 19th century as a teaching manual for bel canto singing by Alessandro Parisotti. It has been a staple of classical singing teaching all over the world ever since, and includes such famous pieces such as Giordani’s Caro mio ben, Caldara’s Sebben crudele, and Pergolesi’s Se tu m’ami. Like many classical singers, I first sang these songs as a teenager in my early singing lessons, and rediscovered them during my opera training in Rome, at Conservatorio Santa Cecilia and then at the opera studio of Accademia Nazionale Santa Cecilia, where I studied with world-renowned soprano Renata Scotto. I spent four years immersing myself in Italian opera and song, and these arie antiche have remained an important tool in my singing and teaching.

As a singing teacher, most of my previous teaching experience has been with adults, although I have also been involved in education and outreach projects for other opera companies.

It is incredibly rewarding, and it is also first-hand proof that opera doesn’t need to be diluted or dumbed down for young people to enjoy it. The music and the stories speak for themselves, and if young people are given the opportunity to engage with this material, they can make it their own and take it to new places beyond our imaginations.

The Songbook tour was different from other education projects I have been involved in, firstly because it involved multiple visits to each school, and secondly because it combined group workshops with individual singing lessons for every student in the project. These lessons allowed us to build a rapport with the students and establish a sense of continuity, and the time between our visits gave students the opportunity to practise and explore the music independently.

Nic Chalmers and I visited four DRET schools in Grimsby and Skegness: Havelock Academy, Humberston Academy, Skegness Grammar and KEVI, while the other team of practitioners travelled to Grantham and Leicestershire. We visited each school four times throughout the spring, culminating in a final performance of the Papageno/Papagena ensemble and the individual arias. Outstanding students would be invited to the Spring weekend at Nevill Holt, where they would receive coaching and perform with the Young Artists.

In the first visit to each school, we sang through the Papagena/Papageno duet from Mozart’s ‘The Magic Flute’, working on musical detail and introducing some ideas of stagecraft. I then performed the selection of Arie Antiche, from which each student would choose a song to study in their individual lessons. As a performer, the responses of the students were fascinating. They made me reconsider my way of expressing the text, how I used my body, my hands and my face. Some students heard colours, pictures, or even a whole story in the performance, despite not knowing what the words meant. One student said that Caro mio ben reminded them of an old wind-up musical box with a spinning ballerina inside. Each student brought their own unique perspective and insight.

In individual lessons, the students chose one piece to study. A typical lesson would begin with warm-ups around Italian vowels, exploring them in different parts of each singer’s voice. We would work on posture, breathing exercises, presentation and communication. We spoke through the text of the song, talked about the translation and discussed what they wanted to communicate to the audience. Every student had their own goals for the performance: for some, it was to memorise the entire aria and give a professional performance, for others, it was to overcome anxiety and sing even a few phrases in front of their peers.

I was hugely impressed by the talent we encountered across all the schools and by the way they responded to the sessions. Though many of the students may not have had much previous experience of opera or classical singing, many were experienced in musical theatre, jazz and pop. One of my students was terrified of singing in Italian but when I asked her what else she sang, she gave me a West-End-ready rendition of a difficult song from a well-known musical without batting an eyelid. The same student came to the following session having perfectly memorised everything we had done.

Many of the students had excellent musical ears and memorised their songs very quickly. Several were very experienced competition winners who had joined the project to learn about opera and classical singing and see how far they could go with it. Some were able to speak knowledgeably about their own singing technique, giving me detailed information about their approach to breathing, different registers of their voice, and other aspects of singing technique. This often made the lessons feel like a fascinating two-way learning process.

At the end of each teaching day, the two teams of practitioners would debrief over the phone as we drove to our hotels. We would discuss the progress made and consider which students to invite to the Nevill Holt weekend. Common to us all was a palpable excitement about the project, a passion for sharing this music with the students and for helping them to perform to the best of their abilities.

In our last visit to each school, the students performed their fully staged Papageno/Papagena duet together, and then each student performed their aria. Every student presented themselves with confidence, announcing their piece in Italian and performing to an audience of peers.

After the project, Nic and I had the pleasure of seeing the students again as part of the DRET Young Musician of the Year at Kelham Hall. It was wonderful to see that some of them had chosen to sing the Italian pieces we had learned together. At lunchtime, we all gathered together in the main hall and Nic taught all the students and teachers a Songbook arrangement of Puccini’s Nessun Dorma. The sound of everyone in the room singing one of the best-known pieces of Italian opera together was, for me, the perfect culmination of the entire project, and a memory I will cherish for a long time.

Students from Humberston Academy perform a duet from The Magic Flute.

An update on our 2020 festival 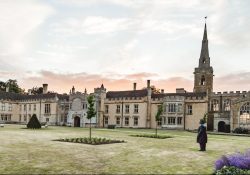 The History of Nevill Holt